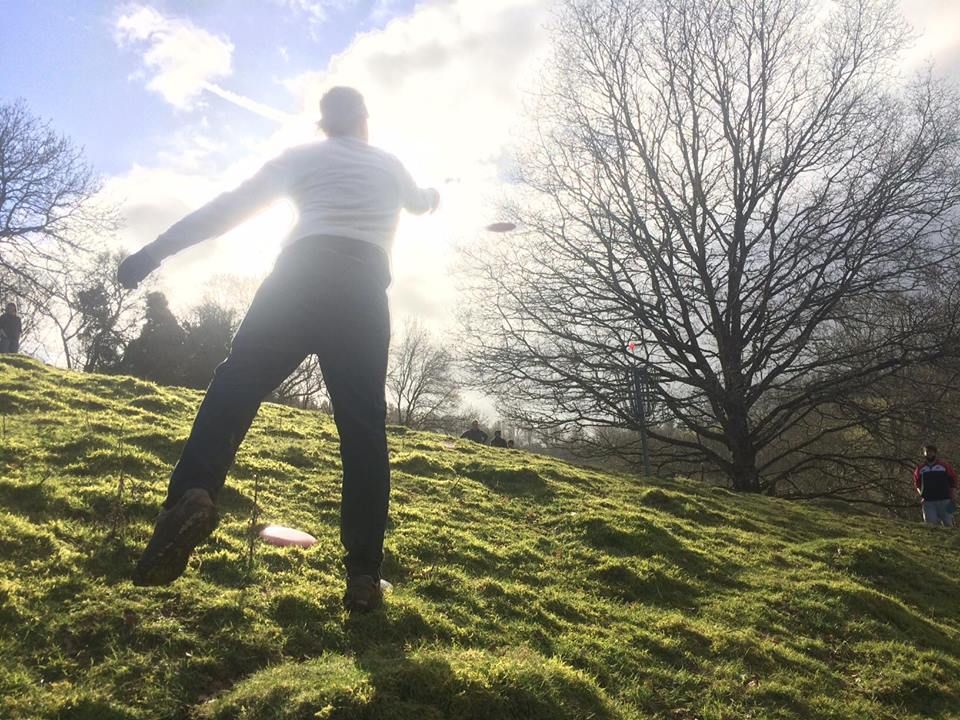 It’s not until you’ve stood at the top and looked down and around at what a beautiful and picturesque course it really is…even in the rain and mud! It still looks magnificent!

Hi everyone and welcome to a new season of the BDGA Tour.

Last weekend saw the return of the every popular Frostbreaker Tournament. Pat Ed and Angus Green took over the TDing and sold out the event!
The weather seemed to behave itself and the photos taken for the first BDGA Nice Shot were amazing.

We have a write of the event brought to you by Jess George.

We also layout the trial year for the BDGA Tour ranking system.

I’ve always been quite fond of the idea of Whitcombe since Matt Cutler and Mark Fleetham were always explaining how good Whitcombe was, but it’s not until you’ve stood at the top and looked down and around at what a beautiful and picturesque course it really is…even in the rain and mud! It still looks magnificent!

Players meeting was held in the newly built barn which looked great! Also the players pack was great! The Hats were the best idea ever! And bacon rolls…you can’t ask for anything better! After the players meeting and Jester asking about OB’s being the only question (no change there then! Ed)..we headed to the tees for tee off.

I had the pleasure of playing with Rob H, Andrew M and Emily W! Once we struggled walking up Wild Field’s hill to ‘Cut to Oblivion’ tee box, I could already feel the burn of the hills and this was only Saturday morning! Rob did a selfie card picture! Hark!  the 2 minute warning! We all had our ups and downs but enjoyed each other’s company and had a great laugh! Once we finished the final hole it was off to get some much deserved lunch after a cold drizzly start.

Chilli?…’I’ve never eaten chilli’ was my thought so was a bit unsure but I will say it was absolutely fantastic! Not only did the Green brothers have chilli but with options for people’s tastes and also for vegetarians! This was great and everyone seemed to be tucking in, talking about shots they left out there on the first round! Happy vibes!

After lunch it was a quick drinks and sugary sweets refill and back out to the glorious fields of Whitcombe! After forgetting my towels and running back I just made it to the tee before the 2 minute call was made. Had the pleasure of playing the 2nd round with Angus G and Jon C, we had a great laugh and we all played some good holes..and some bad! and Angus showed off his bagging skills in the Int Am Div!.. Home course advantages…terrible! 🙂 On our way to Hypotenuse, we heard a loud cheer! After looking down we saw Mr Michael Share Throwing in a ACE on Spring Jump with FH Flick! Well done Michael!

On the night we were treated to some freshly made scones which I must say were delicious, and even despite of a muddy/ rainy first day everyone was in great spirits finding out how others did, explaining the exciting things that happened out there and talking about the great photos being made!

After not knowing what everybody had scored yesterday I was eager to find out who was in the top card for Ad Am for the first round of the final day, I was lucky enough to make it in the top 4 and joining me was Ed and Pat Green and also Dan Brown! Even though we were happy to be there and had a great laugh playing together, we all played pretty bad if I recall!! Ed, I will not mention your 3 putting on hypotenuse..(oops)! So after finishing the last hole, we were all a bit unsure who made the final 9!

After another fantastic lunch and a handful of sweets, the cards were organised and the line up was as followed in front was Ed green, then 2nd was Dark Mavis, then 3rd was luckily enough to be myself and then 4th and 5th were Pat Green and Tomasz Nowak. It was Tomasz’s first time competing in Ad Am and he managed to make the Final! Well done Tomasz.

I was a little nervous standing on the tee of ‘Hang Time’ and went for a completely different approach from the other 3 previous rounds, which was a FH instead of the easy BH, as soon as the wind flipped it, I knew I was going to be at least 30-40 ft away..so didn’t even think about anything apart from slamming it in for the birdie..and it flew straight in! What a start! After all of us playing some sensible golf through the next few holes, we got to Hypotenuse and I decided to send a flick way left and expect it to come and fade back….nope! it never came back so ended up with a super tough up shot which luckily I parked…also Pat without anyone really quite knowing just birdied hypotenuse! The next 2 holes were pretty standard play and then we played Wild Fisher! (Jungle hole) Everyone had some challenge on this, I made it through clean but landed in the wrong field so had a tricky up and down for a par, Tomasz was brave enough to go for it off the tee which was great to watch. After finishing ‘Wild Fisher’ took a short walk to Goolagong..standing on the best finishing hole in disc golf! Goolagong is a magnificent hole, down hill over a pond with the basket perilously close to the far bank. The scores were as followed, me and Mavis were tied for the lead, Ed was one back and Pat 3 back, and Tomasz teeing last. I tee’d off and put it straight in a bush on the side of Goolagong but then I watch mark saw it off short. After trying to comeout of the bush I hit a branch right in front of me which made the disc go about a metre in front…dammit! Before I threw the next shot I looked to watch what Mark was doing, and watched him unluckily put it in the pond twice..so managed to throw a ani BH out of the bush over Goolagong and luckily even after a very suspenseful roll it stopped just before the pond. Ed had made it over the pond from the DZ so I was waiting to see if he’d make it and when he missed that putt I was able to lay up and take the win by 1 stroke! My first Ad Am win and a great start to the 2016 season!

Thank you Pat, Ed and Angus for your amazing work and dedication to make The Whitcombe Frostbreaker so amazing!! And also to anyone else I missed off the thanking list! And if anyone has not played Whitcombe, then I’d urge you to sign up if another event pops up here! As you’ll be amazed at how beautiful and picturesque it really is! No course has come close to Whitcombe since I’ve started playing disc golf! So bring on the next one!